What to do?
Basque Country 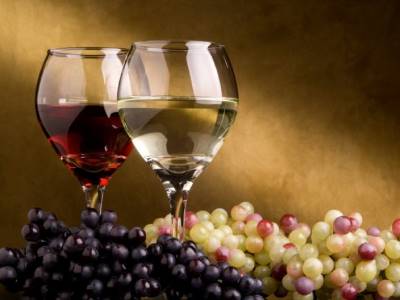 In the last years, there have been created new infrastructures around the old wine industry, and this have promoted the tourist uses of the grape.

The culture of wine has created an interesting link with gastronomy, art, natural environment and body care. The wineries offer a wide range of activities such as: wine tasting courses, guided tours of the wineries, activities related to the grape harvest or sophisticated beauty treatments based on wine therapy.

For those interested in wine culture, many of the most important wineries have carried out ambitious architectural projects to continue offering the highest quality wines and bring them closer to the public. They are wineries with a long history behind them that have managed to combine tradition and modernity. 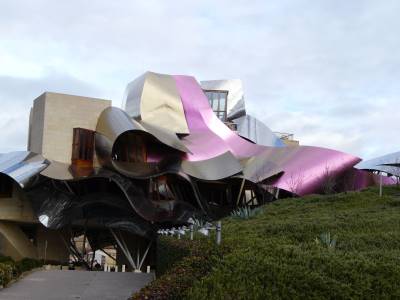 The winery is made up of a complex consisting of the old winery founded in 1858 and the new building designed by Canadian architect Frank O. Gehry. The called Spanish Chateâu of the XXI century houses a luxurious hotel, two restaurants and a Spa that offers wine therapy treatments.

It is a spectacular marriage of tradition and avant-garde design, attracts visitors from all over the world and boost the image of Rioja. 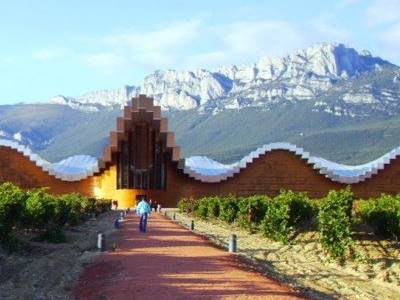 The Ysios winery is an avant-garde composition well coupled with the landscape, and designed by the architect Santiago Calatraba. It has become the pioneer signature winery in La Rioja since it opened in 2001.

One of its strengths is they are exclusively dedicated to the production of Reserve wines and unique coupages. 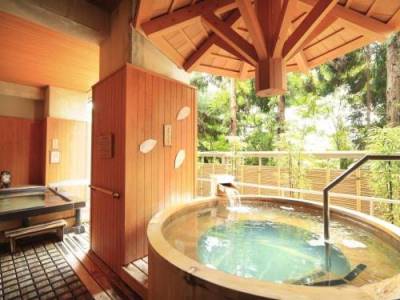 The exclusive Vinothérapie® Caudalie Marqués de Riscal SPA has extensive facilities dedicated to your wellbeing in the best environment imaginable. We will be pampered by the expert hands of Wine therapists, who carry out exceptional treatments with the prestigious Caudalie products. 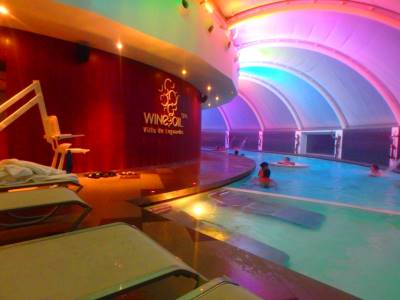 Located in the heart of Rioja Alavesa, the exclusive Wine & Oil Spa offers a health and beauty centre that bases its treatments on wine and olive oil. The centre is almost 1000 square meters and is divided into two areas, one large dedicated to the spa circuit and the other with 15 treatment cabins. The Villa de la Guardia Wine Oil Spa has awards such as "Best off" wine tourism services. 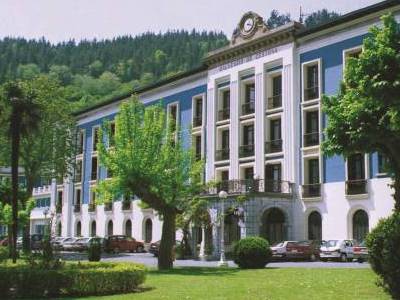 The spa is located in a building from the end of the 19th century and is surrounded by a beautiful garden, which can be considered a botanical garden. Its strongly mineralized waters are especially suitable for treating digestive and locomotor systems ailments. In addition, the Spa offers beauty treatments. 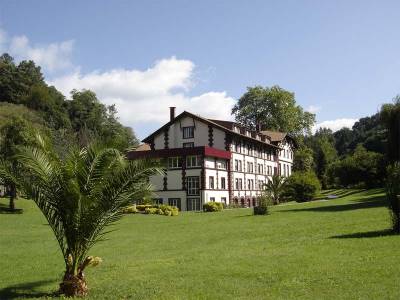 The Molinar Spa is located in the beautiful Karrantza Valley and offers to visitors the opportunity to benefit from the excellent properties of its waters in a rural and quiet environment. The medicinal mineral waters are recommended to treat rheumatic, respiratory and nervous system problems. 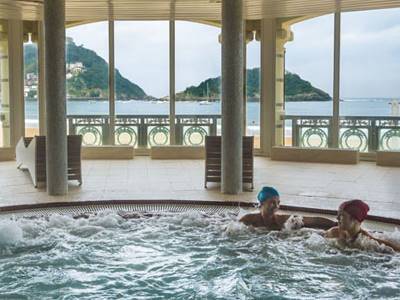 La Perla Thalassotherapy Centre is one of the Belle Époque landmarks that the city of San Sebastián still conserves. A century ago,the Queen María Cristina, established her summer residence in the city to enjoy healthy “baths of the sea”.

Now it is one of the largest and best urban thalassotherapy centres in Europe, centrally located in the heart of La Concha Bay. This is a unique environment, where sea water is used to achieve true relaxation therapy and body toning. 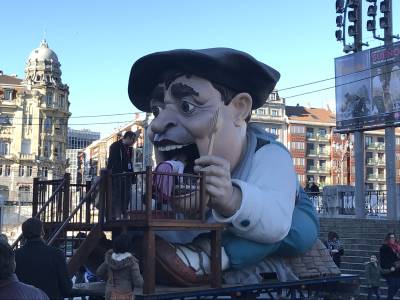 Local Fiestas in Euskadi take place throughout the year and offer visitors the chance to have a good time and also to learn about our culture and traditions. There are religious festivals, celebrations related to the winter and summer solstices, pilgrimages or commemorations of ancient exploits.

The party begins in Vitoria-Gasteiz, with the Blanca festivities (1st week of August) and is celebrated in honour of the Virgen de las Nieves. These parties are unthinkable without the blouse groups.

After comes La Semana Grande de San Sebastián, organized around the festivity of the Virgin Day (15th August). We can highlight the gastronomic competitions and the fireworks that take place in the lovely Bahía de La Concha.

Last but not least, la Semana Grande de Bilbao that begins on first Saturday after 15th of August. There are characteristic characters as Gargantúa and Marijaia (cardboard giant Queen of the party) processions, music and txoznas (outdoor bars) are the protagonist.

Throughout the year there are other festivals to highlight: 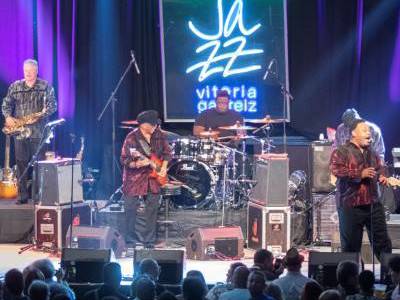 Below there are a list with the most outstanding festivals and cultural events in each province.

As usual if you need further information, please visit the Tourism Offices. 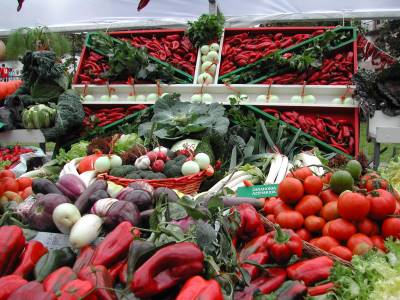 In the Basque Country many popular traditions and customs are preserved and almost all they are related with rural or seafaring character.That is why they coexist with conventional markets, the spaces in which the baserritarras (farmers) sell their products as they have always been doing.

The saddles in which they transported their production from the farmhouse to the town have been replaced by automobiles, but the fruit of their work is basically the same: fruits and vegetables, which although they do not always have a splendid appearance, have the flavour of the genuine and it is one of the keys to magnificent Basque cuisine.

These farming markets have a long tradition and some date back to very distant times, such as the Tolosa fair, which has been held every Saturday since 1253. The Ordizia Wednesday fair, which hosts the annual Idiazabal cheese contest, in which people pay exorbitant amounts for the winning cheese, it has been celebrated since the 16th century.

Very traditional is the Gernika's Monday market, especially the last Monday in October.

But in these fairs we can find much more than fruits and vegetables. Usually, there are cattle for sale and traditional Basque Cuisine such as: cheese, talo con chorizo, beans, Basque cake and for drink of course, txakolí. 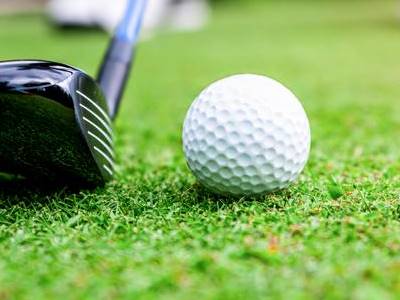 There are several golf courses in the Basque Country, some of them designed by the best Spanish golf names such as: Severiano Ballesteros and José María Olazabal, and some of them also have beautiful views. 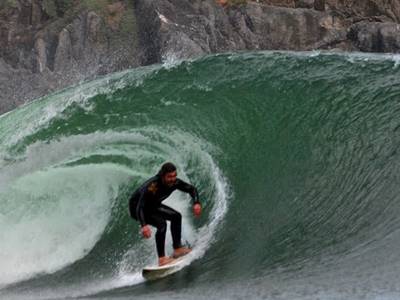 The Basque Country has 200 km. of coast and with several beaches for the practice of surfing.

The beaches of Zarautz and Mundaka stand out for the perfection of their waves, and every year they receive many surf fans from all over the world. 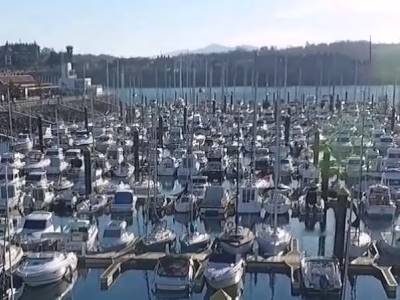 The Basque Country has always been closely linked to the sea and has a long fishing and seafaring tradition. Currently there are several marinas and fishing ports where you can practice all kinds of water sports, or where will provide you with all the necessary services, if you have decided to bring your boat.

Especially in summer there are organized sailing trips between Getxo-Castro, Getxo-Bermeo, and Getxo-San Juan de Luz.

For those who like to shake off tedium of urban life and doing some adventure sports like: bungee jumping, rappelling, canyoning, hydrospeed, hang gliding, paragliding, climbing, caving, there are many opportunities due to the exceptional climatic and geographical diversity of the Basque Country, and the quality of the companies that offer their services to practice these sports.

Besides, mountaineering is deeply rooted in our region and there are plenty of beautiful mountains to practice it.

The native sports together with the language, become a first order ethnographic testimony on the singularity of the Basque culture.

Most of the Basque sports were related to the life of the farmhouse and the sea and they are a demonstration of strength, skill and elegance, which can be seen during the popular festivities that take place throughout the year. 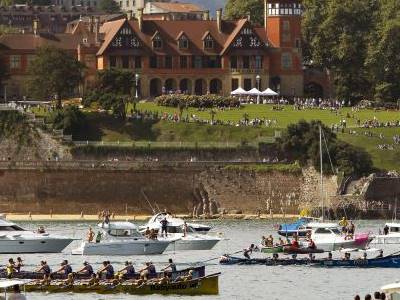 Las Regatas de Traineras is a very popular rowing competition, and there is a regatta every week, in almost all coastal cities between July and October. The boat is made up of thirteen rowers and a captain and is derived from 19th century fishing boats.

The most important regatta in the Basque Country takes place on the first two Sundays of September: Kontxako Bandera, in the beautiful city of Dosnosti, where the best teams compete very hard to win, following a tradition of more than one hundred years. 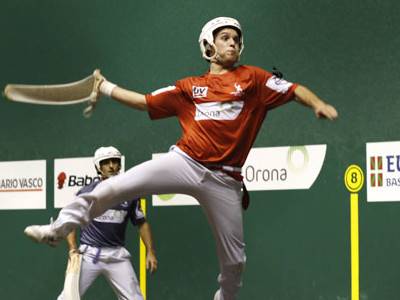 This sport has always been practiced in the Basque Country, and also in other neighbouring regions such as: Navarra, La Rioja and Burgos. But it is also practiced in other countries such as: France, USA, Argentina, Mexico, Chile, Cuba and even the Philippines.

There are several game modes: Pelota a mano, Pelota a Pala, Pelota a Remonte, Cesta a Punta, Trinquete, Share and can be played individually or in pairs.

There are several pelota court such as those of Bilbao, Gernika, Durango, Vitoria, Donostia, Eibar, Bergara, where betting is a tradition.

The most appropriate time to enjoy rural sports is during the celebration of the different patron saint festivals in our towns and cities.

Here there is a brief description of the most practiced rural sports.

If you need further information, please contact the Tourism Offices.

Log cutters face their beech logs with their axes in record time. 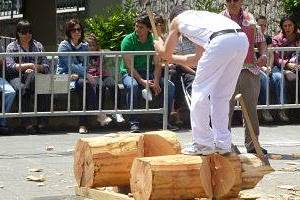 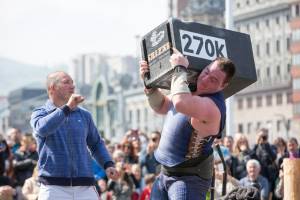 There is the most popular form of Basque dragging games, where oxen drag stones of more than 3,000kg from one side of the square to another. 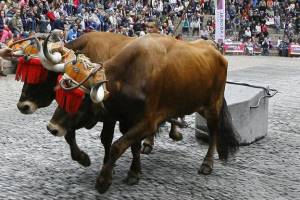 Two teams holding on to the ends of the same rope continually try to bring the opposing team to their ground. The Basque team is very power in this sport and has won several medals in the Sokatira World Cups. 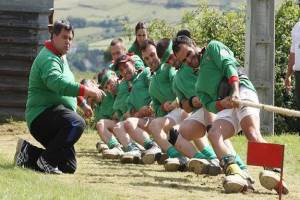